The first PWA is over. We did four eliminations on gusty winds going from 7 to 25 knots. I came early from Maui to Europe with the idea of getting some LAKE conditions before the event. I had three decent days in, that let me readopt my style and my gear for the event. The gusty winds made me decide to take the 8.4 on all the heats i did. I took my big board 78 the first day, and then my middle 66 the second day. 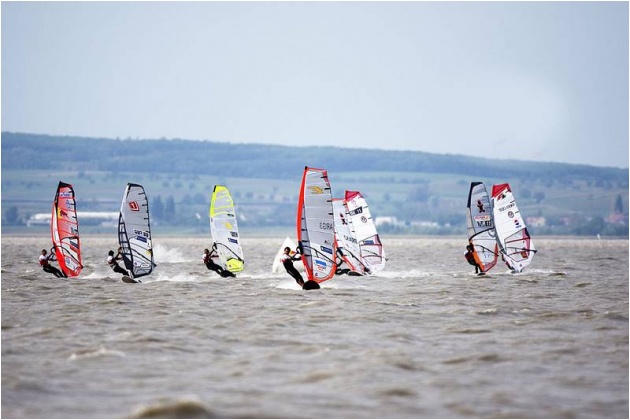 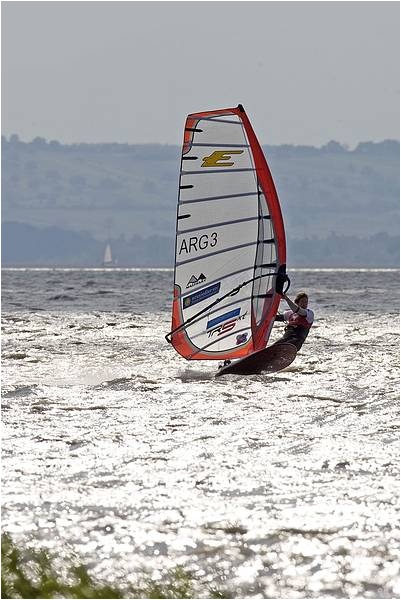 1st Elimination
I had a pretty hard second heat with six good guys on it already. I was pretty nervous and had a bad start at the pin. I  manage to get to the mark on 4th just inside Kevin and a little behind Gabriel. I close the jibe too much and hit the huge Red Bull mark. I fell in the water and got last on the heat. First elimination of the first event of the year, i learned i was to concerned about who was in my heat instead of focusing on starts. From now on i didn't even look to who i had on my heats and stayed super focus reading the wind and starts.

2nd Elimination
I did pretty good and got myself in the final. The wind was stronger now and i felt i had very good speed.  On the final I had a good start middle of the line on top of Finian. I got second to the mark behind him and i was gonna make a safe jibe when I saw that he open too much and left a huge space close to the mark. I went for it but missed the wave when flipping the sail so i kind of cooked it. I passed him but Bjorn had a better one and passed both of us. I chased Bjorn and on the third jibe i almost passed him jibing wide. On the last jibe I was too close to him and almost crashed him when finishing my jibe so i had to suddenly point up. This gave Finian the chance to race me to the finish and passed me. So i got a third.

3rd Elimination
I knew my speed was very good either on the lows or in the gusts. I felt comfortable with my 8.4 and decided to stay on it. I realized that many top guys were starting to go on their smaller stuff but to me it looked like a risk. I won some of my heats and got myself in the final again. On the semi i passed Ross from the top so i felt i had a chance to win the final. Unfortunately the wind got a little lighter. And having already a bad result on the first round i took it easy at the start and started again high on the race committee. I raced Antoine, who had started on the middle of the line and Ross that was at the pin end. When we got close to the mark the wind died and Ross manage to squiz himself inside. I stayed on third until the fourth mark, when the wind disappeared and Quentel passed me. Got a 4th. 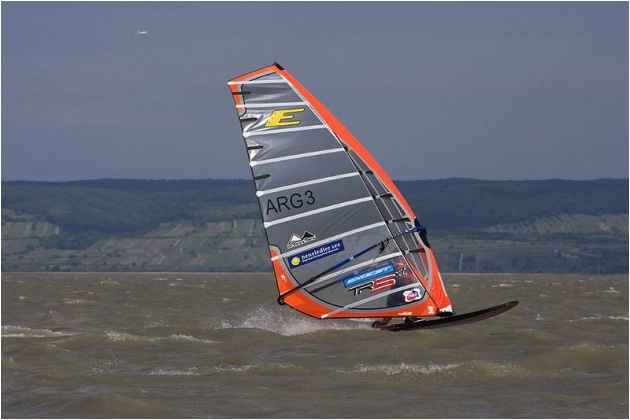 4th Elimination
Now the wind was stronger again and i won all my heats to get in the final. On the semi i passed Finian from the top so again i felt i could go for it at the final. The wind died again just before the last minute so again on my mind i had this thought of not risking it so I went for a committee boat start with Quentel. I got 4th to the mark and i made a wide jibe and passed Antoine and Finian. Ross had an excellent start at the pin so he had a good inside jibe. So i got 2nd. 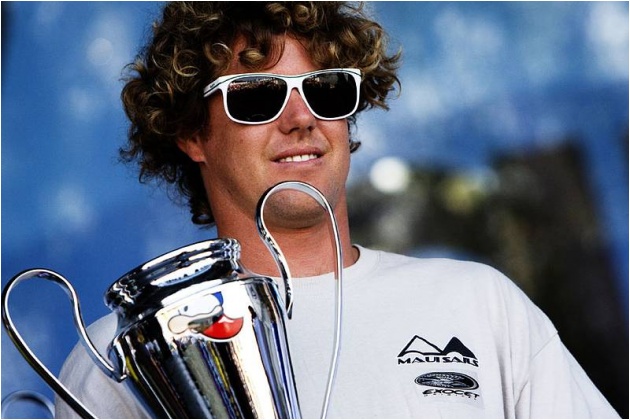 I raced all the heats on my 8.4 TR-5xt, and felt great. Either on my 66 or 78 the sail felt very good, huge range. I am really happy being third as this is my best PWA finish so far.

I am off to Korea tomorrow, trying to get early there to adapt to the conditions. 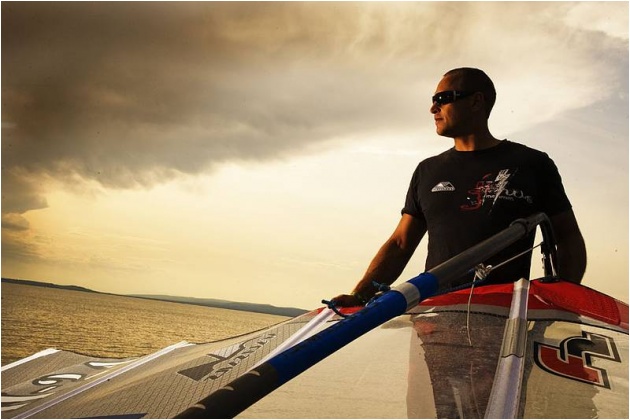 The event started off well for me finishing 4th place in the first elimination. Everyone was going very fast and I was happy to open with such a resulteven though I was in second most of the race behind Antoine. The wind has been very unpredictable and gusty at the lake because of the mountains, and sometimes you really had to be lucky with your choice of equipment. 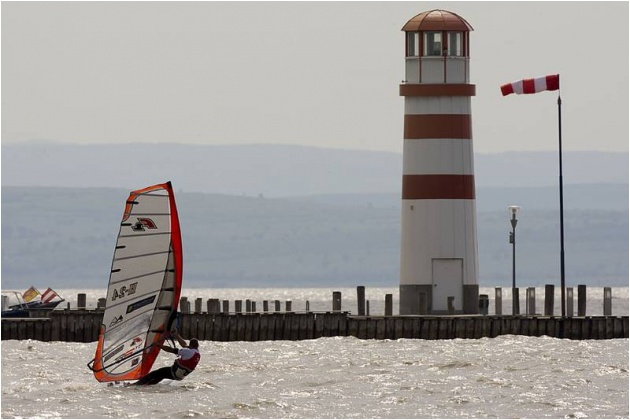 Right before the starting procedure of elimination 2 I broke my harness hook, and I didn't manage to complete the race. Here I was in 29th place after the first day with little wind   forecasted for the rest of the week..... So I was happy to come back to finish in 8th place overall at this first event after 4 just races. My speed was good and the gear feels really tuned, looking fwd to the next events coming up! 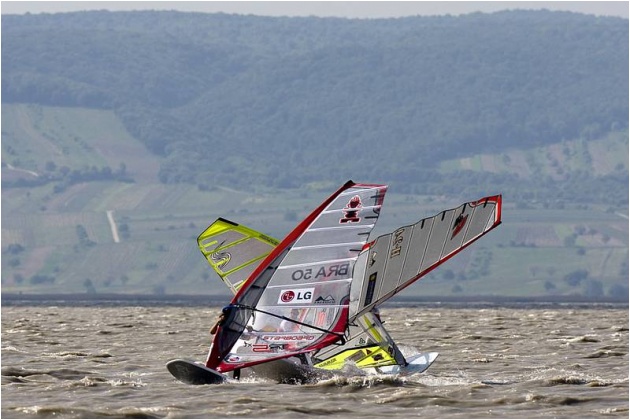 We finished today  the first PWA event in Austria. The event was very well organized and lots of people watching everyday. The conditions most of the time were light winds, around 9 to 13 knots. Here is different from any place I've been because the wind changes very quick. I was using my TR5 XT 9,2 in almost every race. I had good board speed in light winds with my TR5’s/Isonic’s combo. I liked it because I could use this sail in strong winds too during some heats, so my range with this sail was very good. 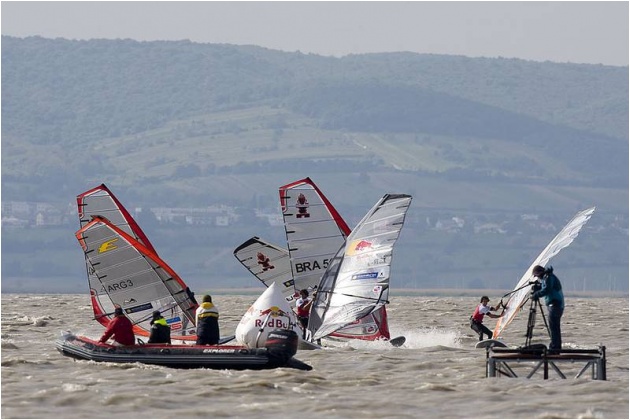 The general level of all the competitors during this event was very high. Everybody is sailing good and if you make any mistake probably you wont advance to next heat. I'm happy with my result. I finished 13th and did my first winners final. The Mauisails team was going fast here and I'm happy for Gonzo for his 3rd place.

Now I'm going back to Brazil and in the end of May I'm going to Venezuela to compete on the Margarita Wild Winds. 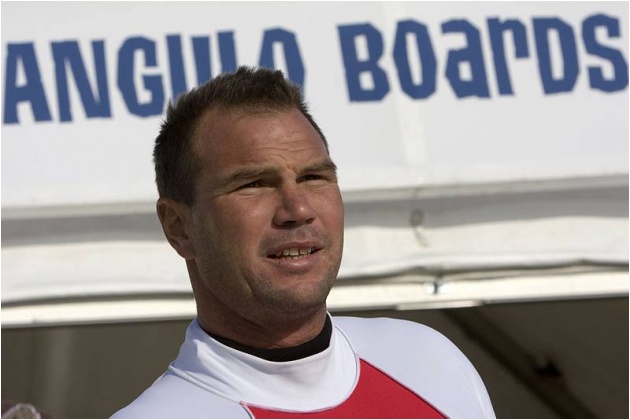 Race 1. First heat  8.4 (little small) advance 2nd heat –  bad start started too low, started at pin, Menegatti sat on me. I should have played it safer and stayed at boat or middle, my speed was average - 9.2

Race 2. 7.6 (real small but advanced), 2nd heat on 9.2, got a good start, won heat, semis – was early to line and headed down to pin then got covered and never recovered in the light stuff... need to start at boat/middle; loser’s final – decent race, overpowered on 9.2, got 4th in losers.

Race 3. First heat, 8.4 first place, second heat got major weed on the start line and tried to come back, had one slight chance on one jibe, but blew it.

Race 4. First heat 9.2 way way overpowered but made it, second heat 8.4 very overpowered 48 cm too big, but made it... semis, was on 8.4, 83 wide and 46cm, feeling real good, all the other guys went small and was feeling confident. Went over early - bad mistake! Losers final - good start - good speed - went for the kill on first jibe, probably should have braked and went for inside got lots more holes on the course and ended up last. 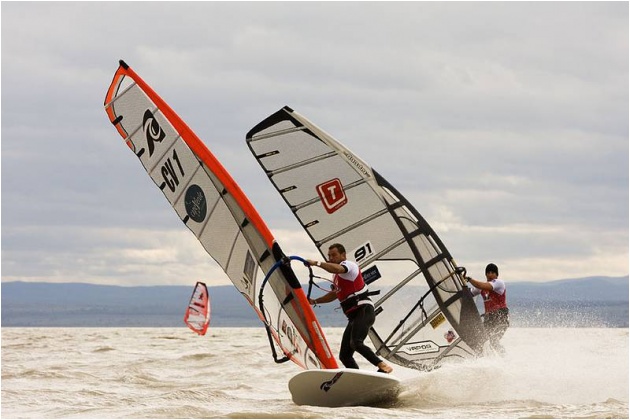