The project started a year ago when Agostino spent a week in the Greek islands with his family on a windsurf/family vacation. Spending most of his time in the Milos/Kimolos Area and sailing in winds over 35 knots he realized a dream and that was to sail downwind  from Tinos on the North to Milos in the South West, unassisted with just a backpack of some clothes, food, water and some money.

Days before the weather was checked and it looked doable, forecast winds was 20 to 40 knots in the entire Cyclades area. Perfect conditions for sailing downwind on windsurf boards,  right!. Agostino and Phil decided before leaving Milan a 6.6m sail and 5.9m sail would be suitable. Wishful thinking that they could do it with one sail. 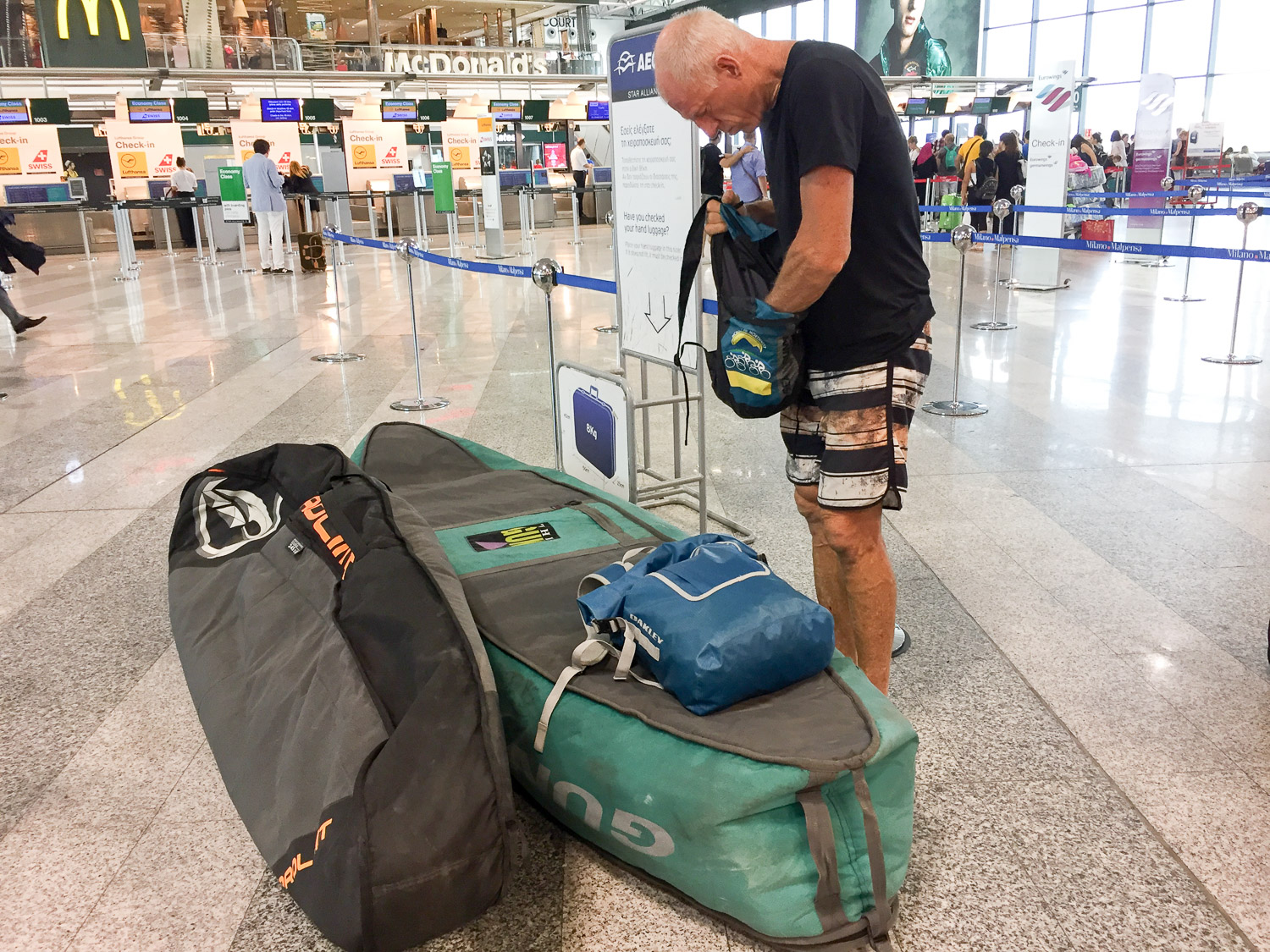 Let the fun begin,  train from Athens airport to downtown with all the gear, walk to hotel, sleep, walk to ferry, ferry to Tinos. Arriving in Tinos we were greeted by 45 plus knots of wind, WHOA. So after a few attempts to sail and being picked up by the harbor police, we decided to get the ferry to Tinos and see how it looked the next day.  Evening plan- Get a hotel close to the harbor and small beach, just in case the Police were around again.

Up early the next day, we were excited to get started. One more encounter with the Harbour police, so we had to launch in onshore winds at the nearby beach. Finally leaving the beach, we immediately encourtered light winds, so slogging for 4 kms was needed before reaching a wind line. NOT FUN.

Before we could get warmed up, it was blowing 35 knots and we headed over to Paros to sail down the East Coast of Paros towards Golden Beach. It only took 90 minutes to reach Golden Beach.  Arriving at Golden Beach, we stopped briefly for snacks, water and a chat with Theo who runs the local windsurfing school.  This was a great downwind run. Crowds had gathered to see the crazy guys sailing around the Islands.

We decided due to the great conditions (and it was still early in the day) we would attempt the next leg which was to sail to Milos far away. Well, it was great for about 40 minutes until we got to the South end of Paros where the wind completely died and we were both left stranded in the water far from land.

Finally we got a slight breeze to get us close to shore and were able to swim the rest of the way to a rocky out crop. Landing on land, we decided to take a walk around the cliffs to spot some new winds. There were winds but it was difficult to reach it with such a large NO wind area. We packed up our stuff and walked 2 kms to the local roads. Standing in the heat of the day and windsurfers on the side of the road, we hitch hiked across the Island to another beach, near Aliki town. Rigged up again and ready to go, we were greeted by a nice couple who we had meet earlier in the day from Theos school. Realizing it was now getting late we decided to take advantage of a car ride, got a room at the local hotel in Aliki and would attempt the crossing the next day.

The winds were forecast to drop a bit but still the next day the winds were blowing early and we rigged and got off the beach about 11am. Perfect sailing for about 1 hour until we reached the south end of Anti Paros the two Islands West of Paros. Now, the winds got light and we stopped planning again. We were now at the point of NO return, meaning we couldn't sail back upwind and had NO choice except go forward. At this time we were at least 15km from land. 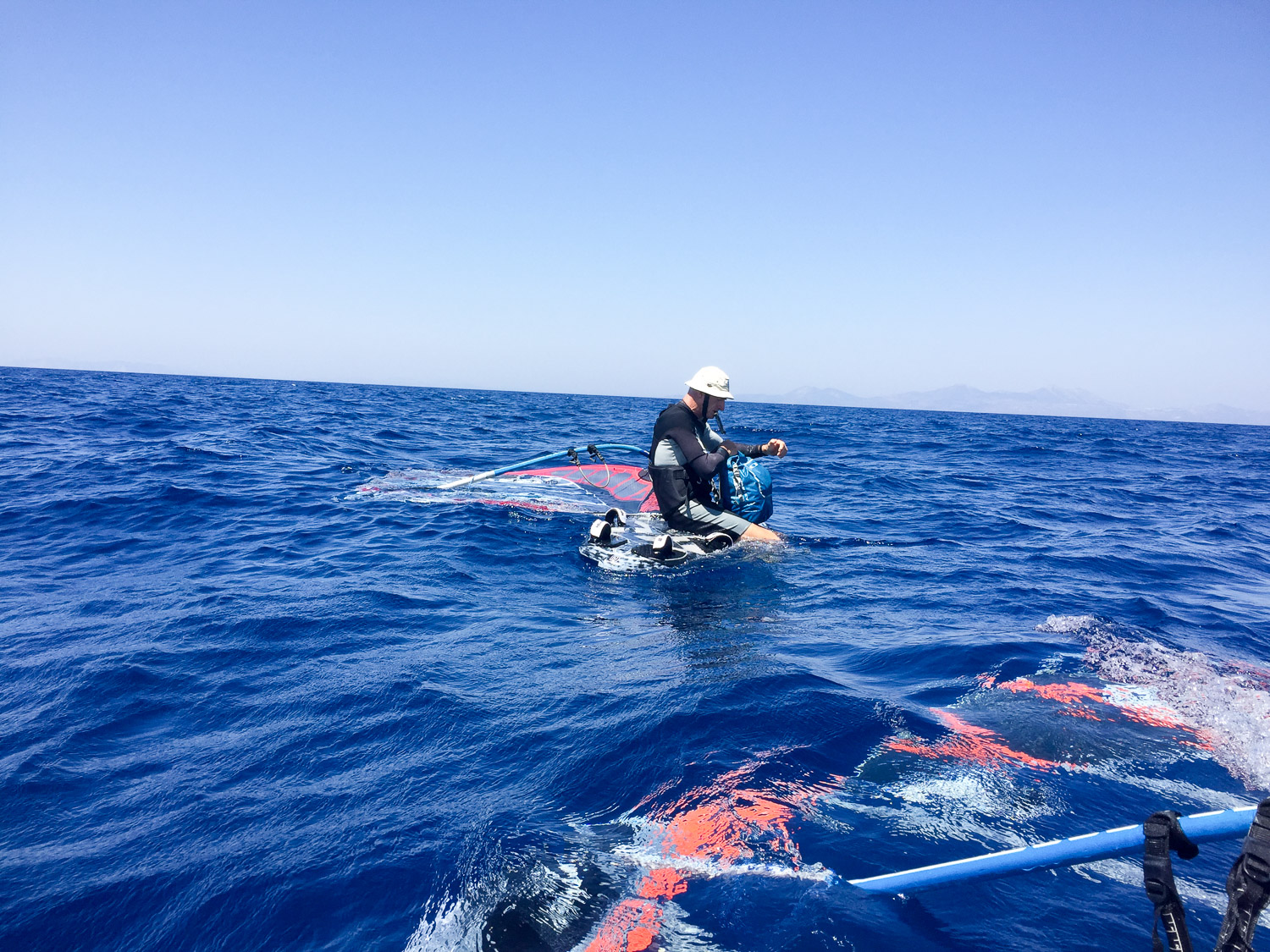 Well, slogging again now for over 90 minutes the winds continued to get lighter until it was almost impossible to stay up right and move forward.
We were officially in trouble. A decision had to be made. Both of us had less than half of litre of water remaining and it was getting very hot as the breeze continued to die to nothing.  Agostino called Theo who called the local Coast guard to send a rescue team. After all the calls were made and our location coordinate sent, the wind decided to pick up again and within a few minutes Agostino and Phil were up planning again moving quickly towards their destination, which was still some 20 kms away. But it didn?t last long and we both came off a plane as quickly as we got onto one, but the rescue to called off and we  thought they could reach Milos within a few hours. WRONG.

Just then Phil noticed a sail boat far in the distance behind them, initially it was difficult to see which way the boat was heading but eventually it was clear the boat was getting closer. Both of us turned around and headed into the path of the sailing vessel. Eventually, Phil was close enough to give a long wave. The people on the 40' Catamaran knew something was wrong, so gathered on the desk to see what they had come across. ?Do you need help?? YES we do. ?Do you need to come a board??, YES please. The skipper took down his sails and within 20 minutes we were on board with our kit tied to the foredeck and heading in the right direction.

Talk about in the right place at the right time?..Lucky boys. 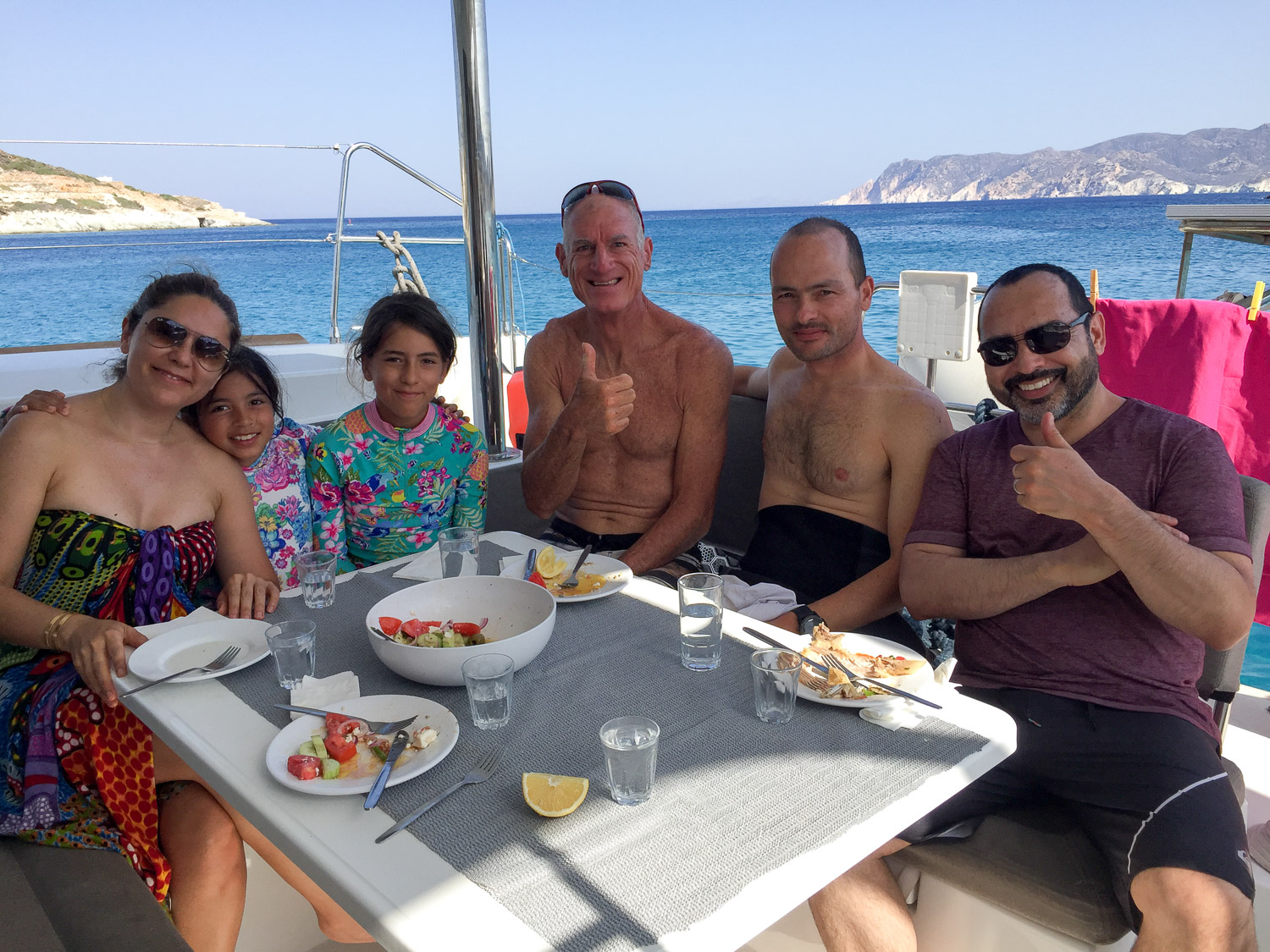 We arrived at Kimolos about 4.30pm and sat down to a nice lunch in the cockpit, went for a swim and a short sail,  like nothing ever went wrong. A small ferry at 7.30pm from Kimolos to Milos, another taxi ride with boards and rigs in the trunk of the taxi and soon we were on the 9pm super jet back to Athens, all safe and sound. Arriving at 1am, another taxi to the hotel, up at 4.30am to catch the train back to the airport.

Morale to the story - There are always BIG wind shadows near Islands. Don't EVER trust wind reports, Greek ferries are ALWAYS late, have a plan B and somehow things always workout.