MauiSails is happy to report that Dutch speedsailor, Martin van Meurs, has accomplished his goal of being the first to record a GPS top speed of over fifty knots. We are happy that he has chosen to use the TR-3 5.1 for this effort, and expect more great results in the future as the development of these very efficient designs continue with the TR-4 and beyond. Martin had this to say:

"The main goal for me when I joined Maui Sails was to try and break 50 knots, regardless of the distance. Training sessions throughout the year showed me I had made huge progress in fine tuning the gear and adjusting my stance for record breaking conditions. However, up till now I wasn't very lucky with the wind. In Southend, the venue for an official record attempt starting in January 2006, my luck changed. The Ray looks amazing. As the tide drops, an incredibly long sandbank gets exposed. It's a long walk to get to the strip, but as soon as I got there I knew this is one of the few places where the record can be set. The very first run I felt the TR3 5.1 worked just like it should. I cranked the downhaul to make sure the sail got enough breathing room for acceleration. The run was smooth but the strip wasn't totally flat. The wind wasn't particularly strong, but still I felt I was smoking. I immediately did a 45,4 kt. 500 metre run with a peak speed of 47 knots.

Late in the afternoon Bob Cunningham, the only one left on the water with Dave McInnes and myself, was smoking on his 5.8. I was underpowered and could only get some decent peak speeds in, but the averages were too low. I needed one more fast run for my day result and decided to put in a lot of negative outhaul to try and compensate for the smaller size. All of a sudden I saw a cloud nearing which could bring the needed wind. As soon as I saw the first whitecaps flying I got onto the board, felt the wind increase and bore off at the wall. Apart from the start, everything went very smooth.. The start was critical since I could only build up speed two metres from the shore, because outside there was too much rolling chop. I was nearly overthrown because of the push in my back from the squall, and then the "magic carpet ride" began.

I slowly moved from front foot to back foot pressure and made sure I wouldn't oversheet the sail. I locked in the mast foot pressure and released back foot pressure a bit. The 5.1, once on the run, still felt a little small. As it turned out later I only got 12-14 seconds of full powered up speedsurfing, the rest was accelerating and decelerating. I didn't have any reference points and I was so concentrated on the run that I forgot to count. The 500 metre run was not perfect by any means and still it turned out the speed was 47 knots. Since it was very bad weather, I thought my Navi showed a peak speed of 83,49 with a topspeed of 89,89 on the dial. A little disappointed about the average I went back to the shore only to find out I did 93,49 (over 50 knots). YIIIIHAAARRR. 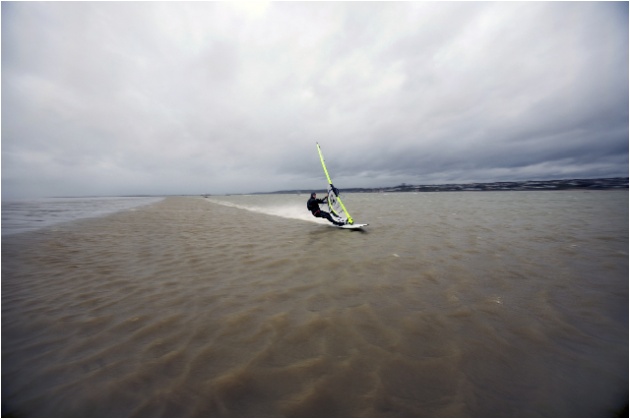 The run showed me this spot is capable of delivering the goods for an outright record. There is no question a couple of windsurfers out there can do the trick, and I'm happy I've earned the right to say I'm one of them. I will do my utmost to break 50 over here, and fight the big boys present at the official attempt. Barry and I already have had very good talks based on the findings of this run to create a sail that is even faster than the TR-3 I used. Hopefully we will get lucky and a windsurfer will be the first craft to break 50 over 500M."

MauiSails wants to thank Martin for all his effort over the last year and for his involvement and dedication to the GPS Speedsurfing concept and it's improvement towards official recognition status. 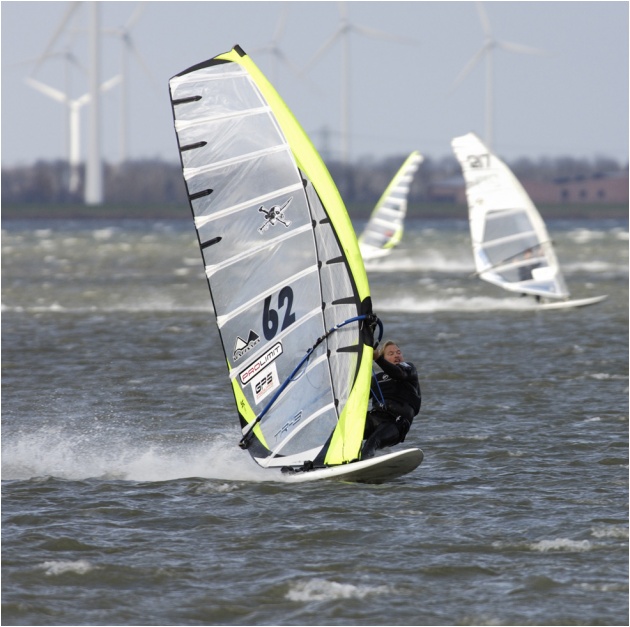 Maui Sails on podium in Holland and Belgium